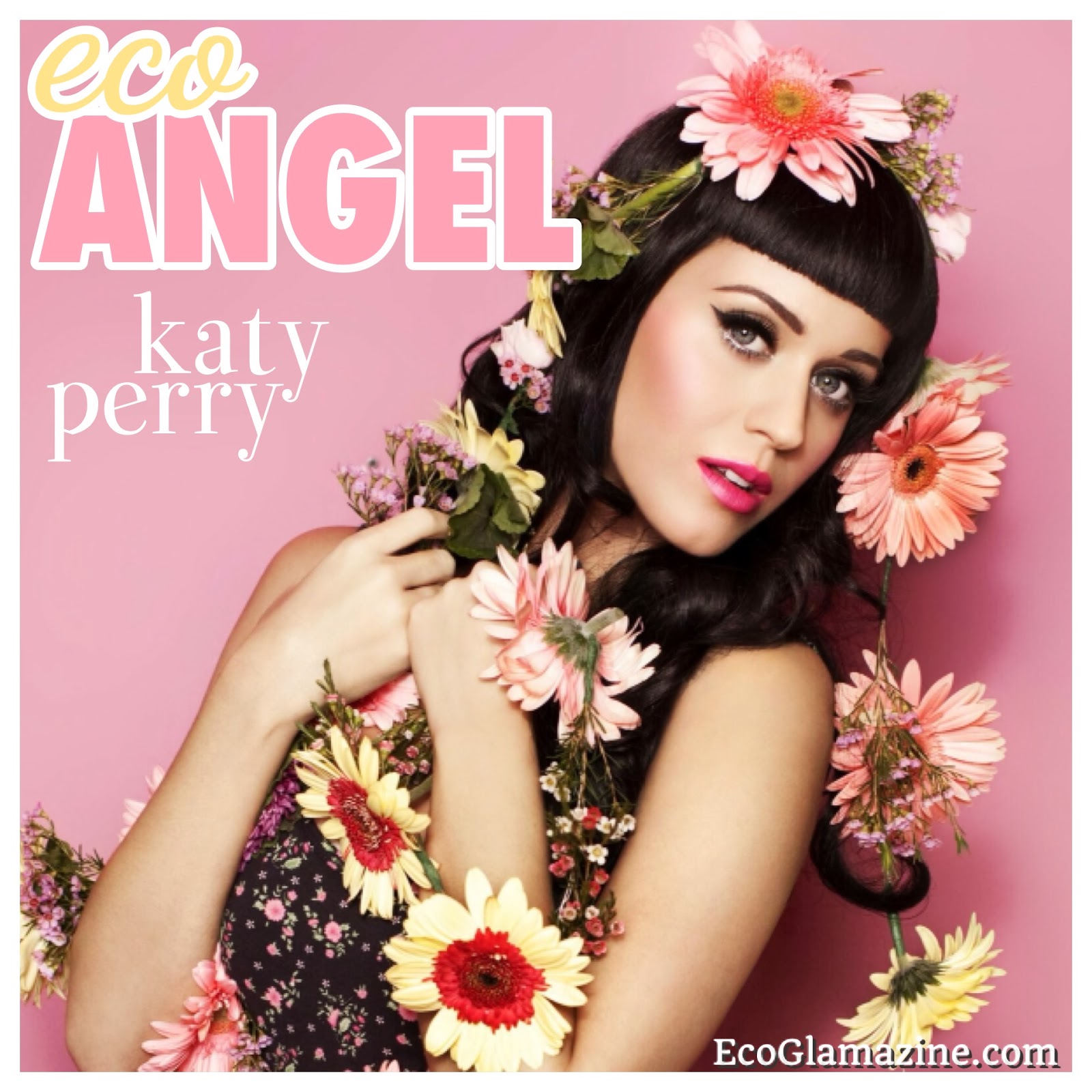 This season's Eco Angel is pop princess Katy Perry! This sassy singer is known for her candy inspired outfits, coloured hair and number 1 hit songs, but there is much more to Katy Perry than just being a pop star.

California Girl.
Katy comes from very humble beginnings. Born Katheryn Elizabeth Hudson, she grew up listening to gospel music. Her mother and father are Pentecostal pastors so Katy attended religious schools as a child and sang in churches until she was sixteen. In 1999 she left high school to pursue a career in music in Nashville. After recording demos and playing guitar she landed her first record deal with a Christian music label. She recorded Christian rock songs and released her debut album in 2001 titled Katy Hudson. Unfortunately the album was not a success, so her record label dropped her, but she didn't give up! She moved back to her home state of California to pursue her dream. In 2004 she signed with Columbia Records but they wouldn't give her full creative control of her music, her album was cancelled and she was dropped from the label in 2005. Soon after she started working on her own recording songs for an album titled Fingerprints. Not to be confused with actress Kate Hudson she began to use the stage name Katy Perry.  It wasn't long before she was signed again to another label, this time it was Capitol Music Group. Third times a charm! In May 2008 Katy released her first single I Kissed A Girl followed by her 2nd album One of the Boys in June. The song was a huge hit and "Katy Perry" soon became a household name. In 2009 Katy got a cute strawberry tattoo on her left ankle to commemorate the success of her album One of the Boys. 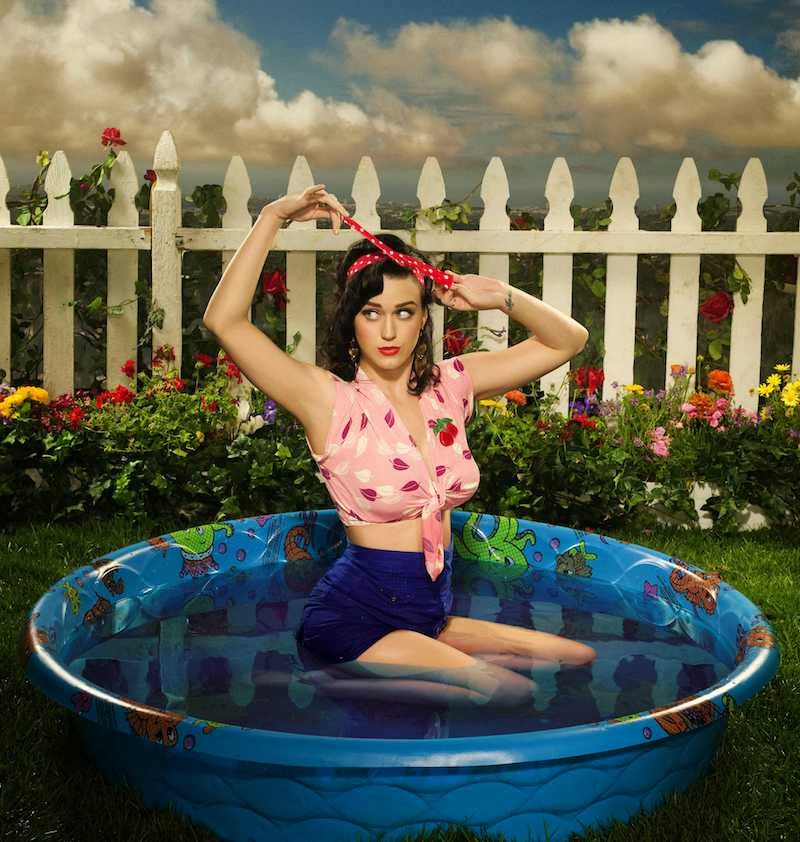 Hummingbird Heartbeat.
The year following her album release, Katy announced her engagement to comedian Russell Brand after the pair had been dating for only a few months. They were married in 2010 in a traditional Hindu ceremony in India.

Following the success of her first album and her first headline tour she began working on songs for her next album. In 2010 her candylicious number 1 hit song California Gurls lead the way for her third album titled Teenage Dream. The album was a smash hit and Katy became the first female to achieve 5 number 1 songs on the Billboard Hot 100 from one album. Katy commemorated her Teenage Dream album with tattoo of a smiling cartoon peppermint candy on her right ankle. It matches the peppermint font used on the cover of her Teenage Dream album. Katy always had a playful, fun nature and she showcased this during the album promo with her multi-coloured hair and candy inspired outfits. Hot off the heels of her California Dreams Tour Katy made her film debut as the voice of Smurfette in the family movie The Smurfs. 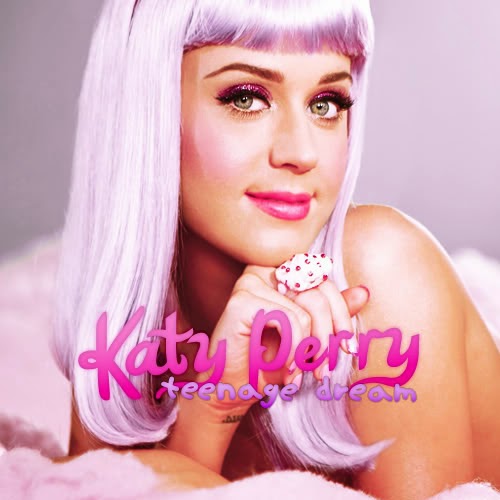 Part of Me.
During her California Dreams Tour Katy filmed an autobiographical documentary movie titled Katy Perry: Part of Me, which was a glimpse into her life in the spotlight.
The film was released in 2012 and revealed the highs and lows of her life on the road. It exposed a vulnerable side of Katy that we had never seen before. Katy's husband Russell had filed for divorce in 2011, only 14 months after they married. Katy was devastated but she was in the middle of a world tour and as they say in show business the show must go on.

After taking a break from music following the painful divorce, Katy released a new song titled Part of Me which many believe was about her recent break up. The song's lyrics included "You ripped me off, your love was cheap, I fell deep and you let me down." Although fans expected a new album, Katy wasn't ready, so her record company re-released her album Teenage Dream with bonus tracks under the title Teenage Dream: The Complete Confection.

Prims and Pearls.
2012 was a turing point for Katy. After the release of her movie she began dating singer/song writer John Mayer. Their relationship ignited a new passion and she began writing songs for her next album. "I know exactly the record I want to make next. I know the artwork, the colouring and the tone. I'll be very pleased if the vision I have in my head becomes a reality."  She titled her new album Prism after doing some self-reflection following her divorce. "The reason why I called this record Prism is because I actually finally let the light in and then I was able to create all these songs. [After] doing some self-reflection and just kind of working on myself." 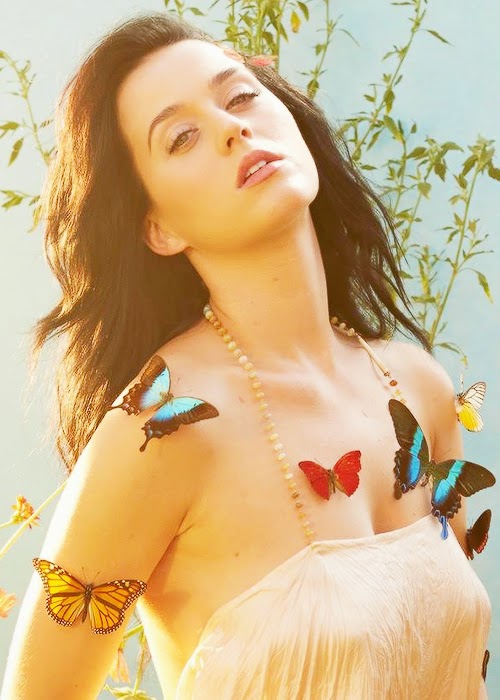 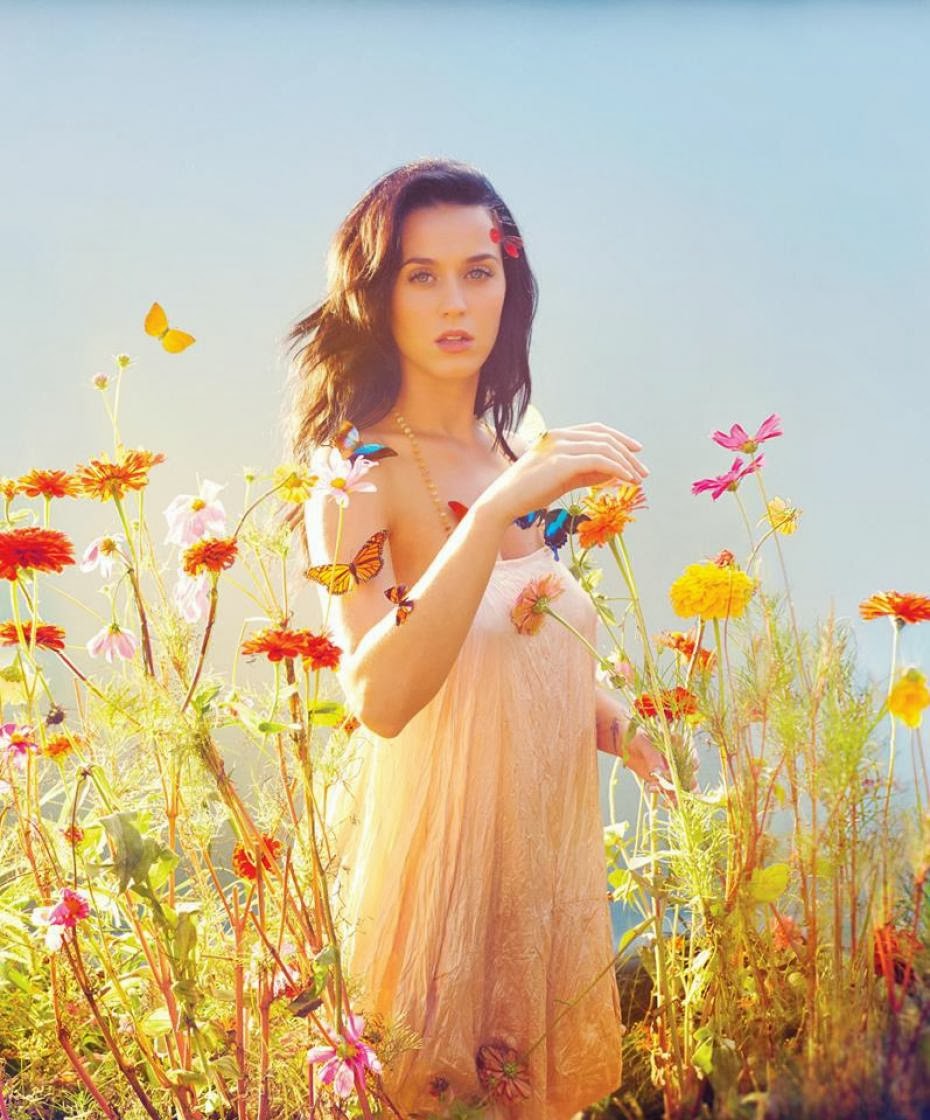 Katy revealed her new sounds with her first single from Prism titled Roar. An inspirational female self-empowerment anthem about picking yourself up, dusting yourself off and how to keep going. "I got the eye of the tiger, dancing through the fire, 'cause I am a champion and you're gonna hear me roar." In the music video Katy featured as Queen of the Jungle dressed in a leopard print bra and grass skirt.

Prism features a new song titled Spiritual that Katy co-wrote with her new beau John Mayer. The song describes love as a feeling like your flying high as a kite and being under a spell. "Flying high as a kite on your love, lost in sweet ecstasy, found a nirvana finally." Katy seems very happy with John and she showed their love and devotion for each other in a new debut called Who You Love that features on John's latest album Paradise Valley. The song is about falling in love with someone. John Mayer said "Who You Love is a sweet melody that tells the story of opening your heart up and allowing yourself to fully love the person in your life." 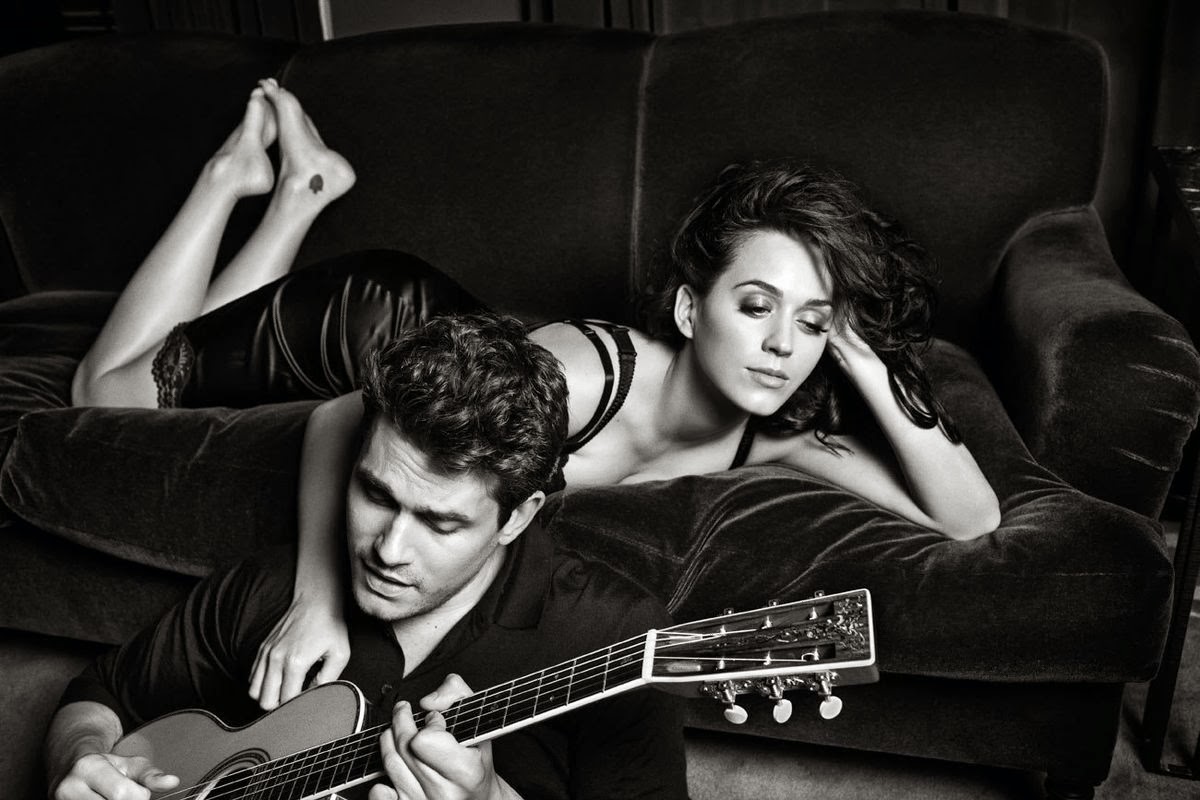 By the Grace of God.
Katy has always been a very spiritual person. After growing up in a strict religious household her views about God have changed over the years. "I believe there's this 'bigger than me' thing thats looking after me. I'm not a buddhist, I'm not Hindu, I'm not Christian, but I still feel like I have a deep connection with God." Katy's first tattoo was the word Jesus tattooed on her left wrist. In 2013 Katy became a global UNICEF Goodwill Ambassador with a portion of her Prismatic World Tour going to UNICEF and other charities such as St Jude Children's Research Hospital and Susan G. Komen for the Cure. 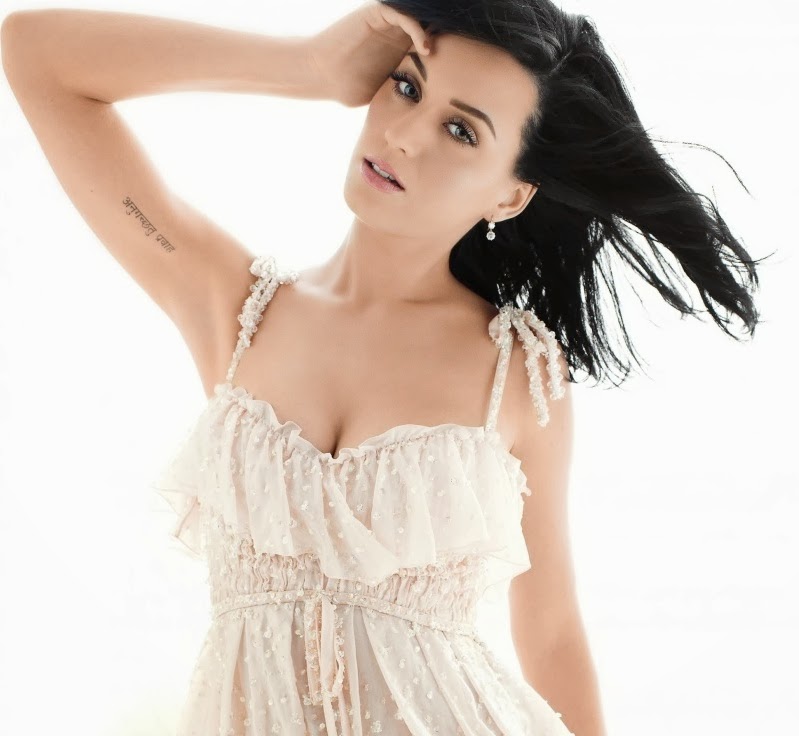 Dressin' Up.
We all know Katy Perry loves to dress up so it was only natural that she would create some beautiful fragrances for her fans (known as KatyCats). Her debut fragrance Purr was released in 2010 and her love of cats influenced the bottle's design. The scent is fresh with a citrus twist featuring peach nectar, pink freesia and vanilla orchid. Frisky and feline, Purr's fruity floral scent is ready to pounce.
She followed the success of her first signature scent with her second fragrance Meow! Katy describes the fragrance, "It's a sister fragrance. Purr to me was a bit more floral and Meow! is a little bit more sweet." Meow! features pear, honeysuckle and vanilla. 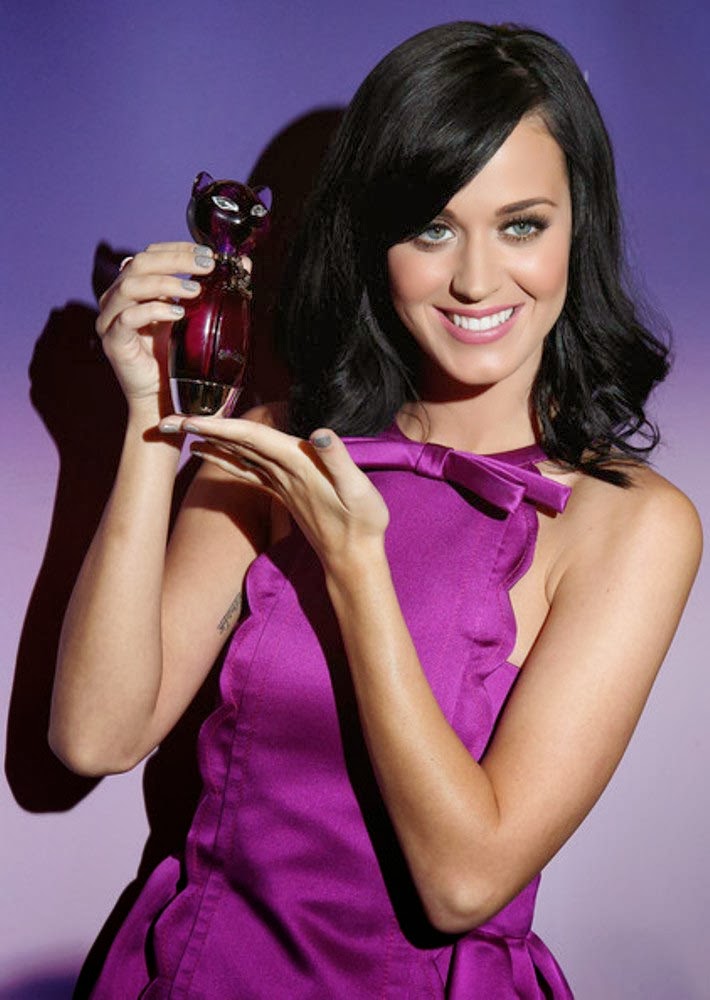 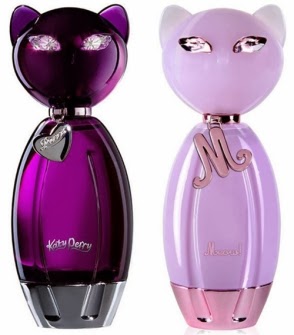 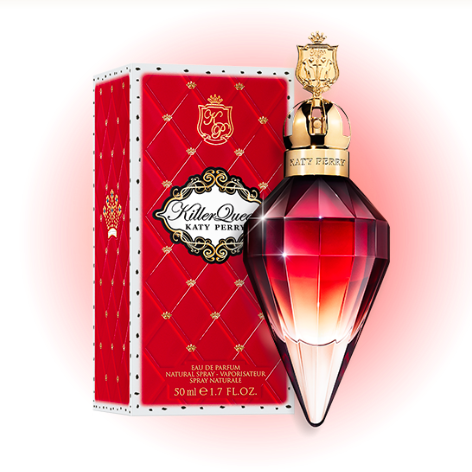 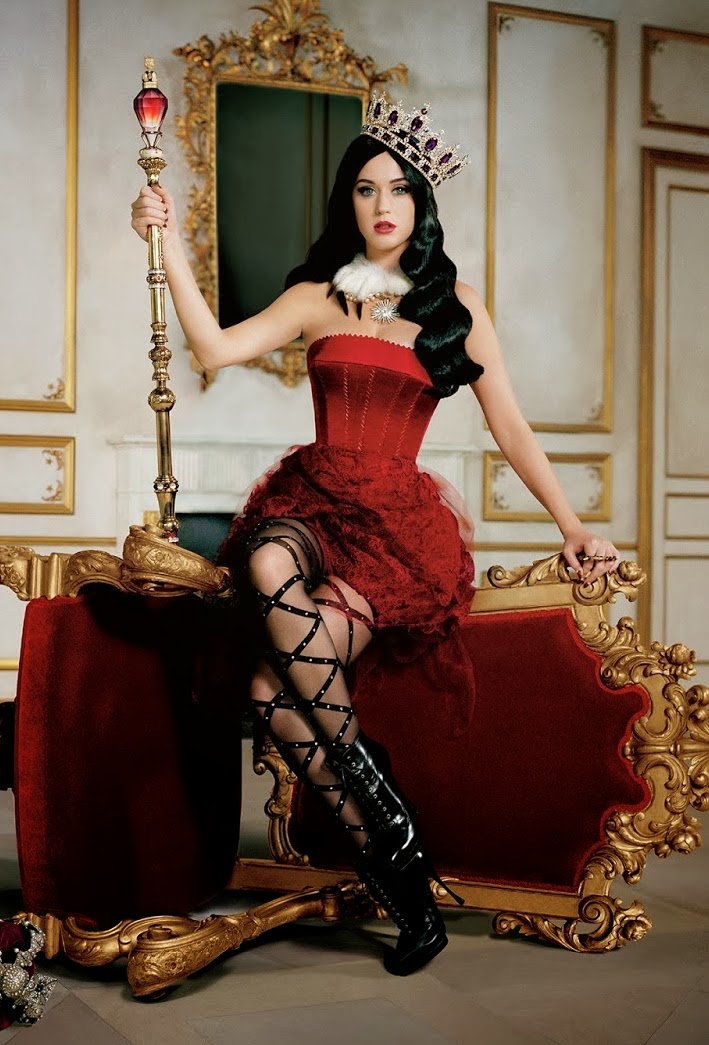 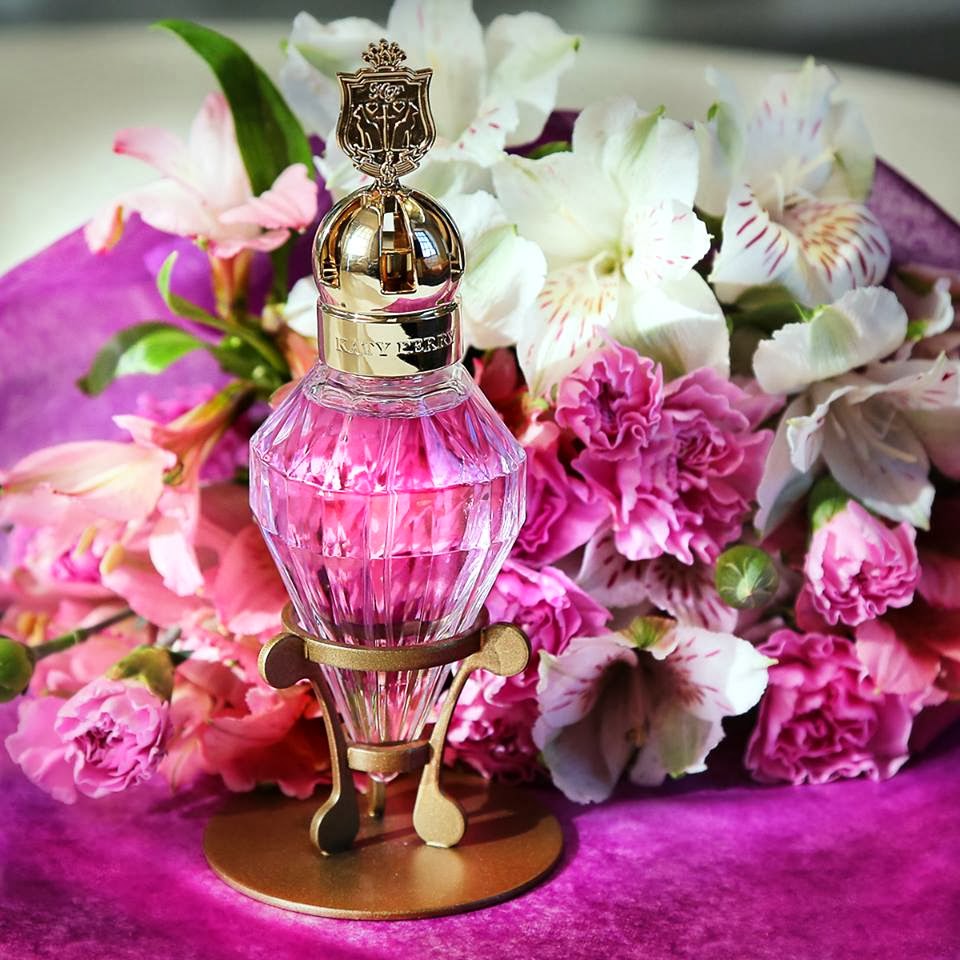 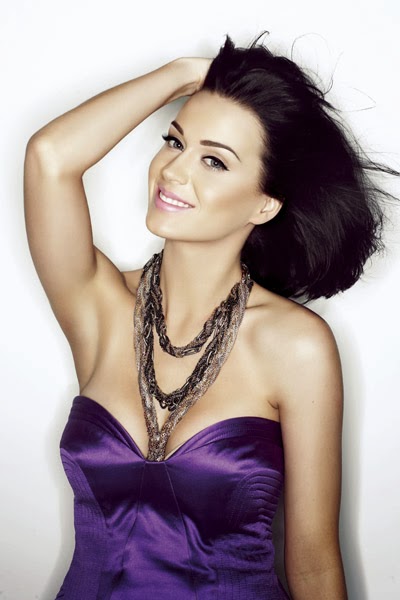 Roar.
Even though she's only 29 Katy has already overcome some major obstacles in her life which has made her a strong woman. Her journey so far and determination to follow her dreams is an inspiration to many. She is also inspired by strong women. "I love Angelina Jolie. Big time. There is something really mysterious about her. I think there is something always to be discovered about that woman, she has got such incredible mystique and she's so, so strong." 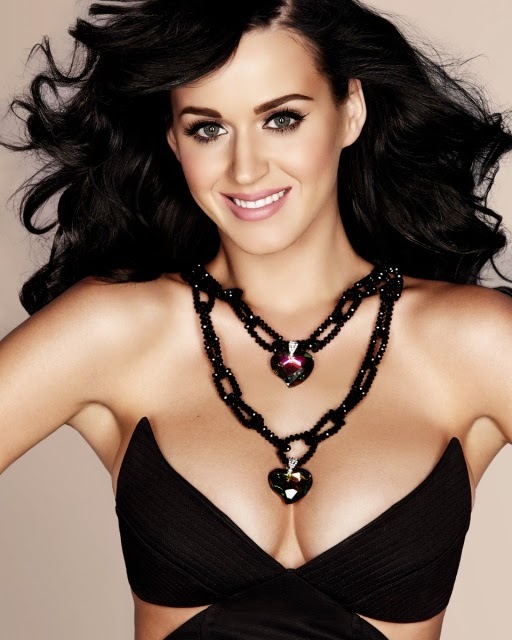 Katy Perry is one pop princess taking control of her life and working hard to create a long lasting career. She is talented, driven, determined and approaches every project whether it be music, acting or being a Covergirl with a smile on her face. She is sassy, strong and intelligent and we know she is the one to watch for many years to come. 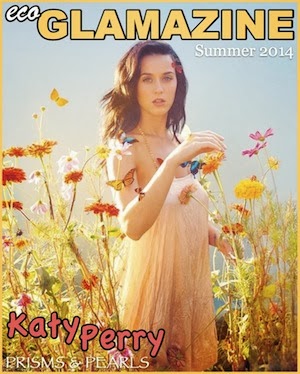 This article is the featured cover story for our Summer 2014 issue.
Posted by Lauren Day at 6:07 AM